It has been pieced together from a variety of sources; eyewitness accounts of local residents, confessions of staff members and discovered documents; that a local Queensferry girl once caught the eye of a nearby Earl as he rode along the High Street to church.

The girl’s family, being respectable enough to marry into the Earl’s, but not recently quite as wealthy as they would have liked, encouraged the girl to accept his advances.

However - as the story passed down by Queensferry gossips goes - the girl was in love with a poor ferry boy, who she had met on a trip to Fife with her family. The first moment they saw each other they appeared to have an immediate and powerful connection; so said the Captain in The Tap that night.
CLICK HERE FOR THREE RED APPLES SOUND poem 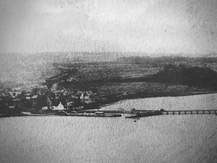 It is perhaps the case that the girl felt too obligated to her family, or that the boy was weighed down by a need to prove himself as worthy a man as the Earl, in the eyes of the girl’s family at least. But whatever the case, the girl married the Earl and in a reportedly, and inevitably, emotional farewell, the boy left Queensferry, vowing to seek his fortune and return one day to his love. As he left he gave her a small paper packet wrapped in string and told her not to open it, but to hide it until he should come back. I suppose it was a kind of insurance policy, perhaps a little selfish on the part of the boy, but interpreted as a romantic gesture by the girl.

At home that night the girl found a small figure of a girl carrying three red apples, above the fireplace. She hid the packet inside the figure, sure that it would remain undiscovered.

Time passed in their marriage and reports of public outings of The Earl accompanied by his wife became fewer and fewer. I will let your imaginations fill in the details of their relationship: it followed a pretty expected pattern.​

One day a new face arrived in town, built a lavish house in the middle of the High Street, and painted it bright white to outshine all others. This young man was wealthy, no doubt - some families owe much to his generosity to this day. But he was accompanied by a sadness wherever he walked. Of course it was the long lost love of the Earl’s wife, returned to reunite with her, but he had some new clothes and so nobody recognised him.

​The source of the man’s wealth too remained a mystery for many years. Digs under the house at a later date revealed passages to the seafront under his home, and so future generations have speculated that smuggling brought him his fortune; but they forgave him, because of his generosity.

What nobody in the village knew, was that the smuggler’s passage had a more important use than the flow of contraband. The Earl’s wife had taken to sailing out of Port Edgar, and had regular stops at a very specific point on the shore. Her secret visits are attested to only by the mutterings of passing sailors, and the collective memory of shore rats. 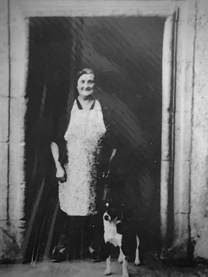 One day the boy asked the girl if she still had the packet he gave her when he left. She did, it sat inside the figure, on the mantle, above her fireplace in the drawing room of her new home. A constant reminder of her lost love, and an incentive to endure, in the hope that one day he would liberate her. He said that one day soon it would be time to open it.

An eyewitness account from a maid at their house, recorded in the diary of a friend two days later, notes a heated argument between the Earl and his wife. The maid witnessed accusations, suspicion, anger and weeping. Finally the Earl grabbed the girl with the three red apples from the mantle and tossed it across the drawing room, removing the head cleanly from the neck. Of course the packet must have fallen from the figure, because how else could it be explained that the Earl vowed never to let his wife reunite with her lost love, a desire he had long suspected in her; and that that night the girl left to sail down the coast and meet with the boy.
​Nobody saw the storm that raged that night. It is not mentioned in the highly detailed weather records kept by the post mistress. And nobody saw the skiff hit the rocks near to the secret passage, nor heard the girl scream as she sank beneath the waves - clutching in her hand, to the bitter end, the head of the girl with three red apples, a hand made, wooden engagement ring in a still unopened paper packet stuffed inside.

The next day, everybody in the village saw the boy, for now they recognised him, come out of his house and paint it an impenetrable black - as it remains to this day. They did not know why, and did not ask.
​And if you are wondering what happened to the headless figure of the girl with the three red apples - the maid was so inspired by the story of lost love between the boy and the girl that she kept it on her mantle as a reminder, and passed it down to her descendants, along with the story. Sadly, its present location is unknown; we can only imagine what it has seen since.